Your Father has a soft place in His heart just for you that gives you, as an insider, direct and complete access to Him!

Entering into the fullness of Christ is not something you figure out or achieve. It’s not a matter of being circumcised or keeping a long list of laws. No, you’re already in—insiders—not through some initiation rite but rather through what Christ has already gone through for you, destroying the power of sin. (Colossians 2:11–12 MSG)

During the American Civil War, a Union Army soldier who had lost his father and his brother in the war went to Washington DC to speak with President Lincoln to ask for an exemption from military service to help his mother and sister on their farm. However, upon arriving at the White House, he was told that he could not see the President because Mr. Lincoln was too busy with the details of the war. Distraught, he sat on a nearby bench when a young boy approached him and asked, “What’s wrong, soldier?” The soldier poured his heart out to the boy about his situation. The little boy took the soldier by the hand and led him around to the back of the White House. They went through the back door, past the guards, past all the generals and the high-ranking government officials until they got to the President’s office itself. The little boy didn’t even knock on the door but just opened it and walked in. There was President Lincoln with his Secretary of State, looking over battle plans on the desk. President Lincoln looked up and asked,“What can I do for you, Todd?” 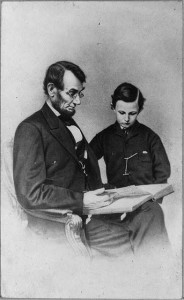 Todd happened to be President Lincoln’s son, and he said, “Daddy, this soldier needs to talk to you.” Right then and there the soldier had a chance to share his story with the President and was exempted from military service due to the hardship his family was under.

Because of Jesus, we have been given the breathtaking right to come straight to our Father, who, unlike President Lincoln, always has time for us. Papa not only has all of the solutions and resources to provide for what we need, but He especially loves it when we just want a hug and to be near Him.

We don’t come to Him once we think we have our act together or when we think we are clean enough or good enough. If that were the case, we would all still be waiting outside. No, we have a Daddy who adores us so much He devised a plan—that Jesus carried out—so we could come to Him clean and perfect as His precious children, all of the time!

For by a single offering, Christ has perfected for all time those who are sanctified.”
(Hebrews 10:14 RSV )

So, friends, we can now—without hesitation—walk right up to God, into “the Holy Place.” Jesus has cleared the way by the blood of His sacrifice, acting as our priest before God. The “curtain” into God’s presence is Christ’s body. So let’s do it— full of belief, confident that we’re presentable inside and out.
(Hebrews 10:19–22 MSG)

Let us, then, have no fear in approaching the throne of grace to receive mercy and to find grace when we are in need of help.
(Hebrews 4:16 NJB)

Your Daddy in heaven says to you:

Child, how about that hug? In My arms you can let Me know whatever is troubling you, but in My presence you may just forget those troubles, because I’m here to love on you and to reassure you that I know how to take care of you!

How do you experience the Father’s embrace?  Tell me your stories!